2019 Housing Market Report : An Insight | A and N Mortgage 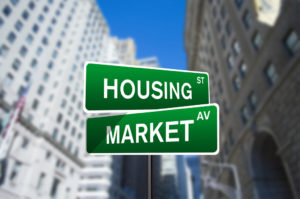 The US economy seems in good shape right now. A variety of indicators from manufacturing output to consumer confidence indicates that, despite being more than nine years old, the current expansion is expected to continue, at least until 2020.

What this means for the housing market going into 2019 is becoming increasingly clear: interest rates are going to rise. The New York Federal Reserve has already raised rates several times since 2015, thanks to impressively low unemployment figures and the perceived risk of inflation, and 2019 looks like it will be a continuation of that policy.

There’s no doubt that interest in the housing market is heating up. 2019 will be an exciting year for those interested in real estate. Will it shape up to be a bumper year for homeowners and real estate investors? Or will cracks in the economic story emerge, and spoil the party?

Earlier this year, investors were shocked to find that the S&P and Dow Jones industrial average had taken a significant plunge and that billions of dollars had been swept away in its wake!

After a positive and tranquil 2017, where the stock markets rose in double digits with the minimal pullback, the February correction was a rude awakening to many investors who clearly expected the good times to continue.

Unfortunately for investors, the volatility is back, and with a vengeance. There were numerous “corrections” in 2018 as jittery investors look at inflated P/E ratios and say to themselves, “do I really want to be in stocks that seem so overpriced?”

The volatility in the stock market, however, could be good news for the price of other assets, including real estate. If investors begin to believe that the shaky stock market is too much of a threat to their wealth, they may increasingly fancy their chances in the housing market, perceiving it as lower risk.

While it’s true that the housing market experienced terrible problems in 2008 and 2009, a systemic collapse of the banking system no longer seems to be on the cards (although this cannot be ruled that out completely). Housing, therefore, might be seen as a kind of haven if the stock market is going to continue to misbehave.

It took until about midway through 2013 for the housing market to start working correctly again after the financial crisis. Existing home sales took more than four years to bounce back from their recession lows because of the lack of bank liquidity.

Once home sales returned to the historical norm, (between 450,000 and 500,000 per quarter), sales remained stable, oscillating around the long-term trend with remarkable tenacity. 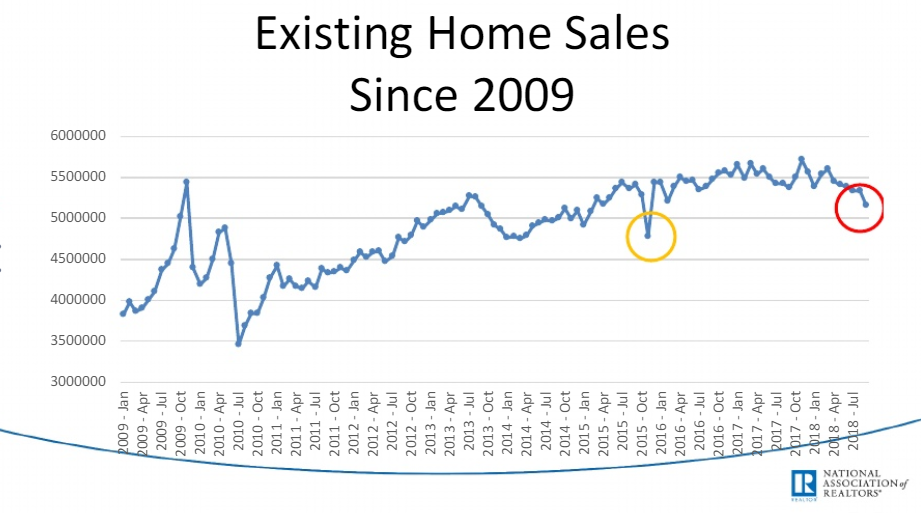 However, towards the end of 2018, things changed, and new home sales had begun to fall quite significantly for the first time in a long while.

Why this would happen in the context of a fully-liquid banking system and a volatile stock market is difficult to understand, although it could be the first signs that rate increases (or the threat of thereof) are beginning to bite. 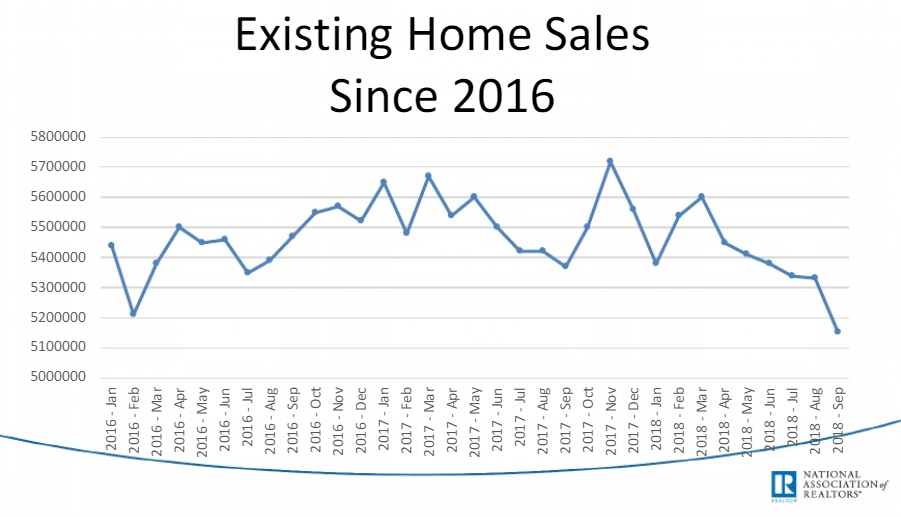 Although the economy is doing well and wages are, at last, rising, these countervailing factors may not be enough to offset the increases in the rising costs of taking out a mortgage going into 2019.

Even small increases in the interest rate can have a profound impact on monthly mortgage repayments, especially for those right at the start of the repayment window.

New home sales, according to CNBC, were down by more than 8.9 percent for November. As a result, whether some of the predicted house price rises will materialize, remains to be seen.

The median house price for a home in the US came down by 3.1 percent compared to a year ago, to just $309,700, suggesting that even with lower prices, builders can’t get rid of their inventory of new homes. 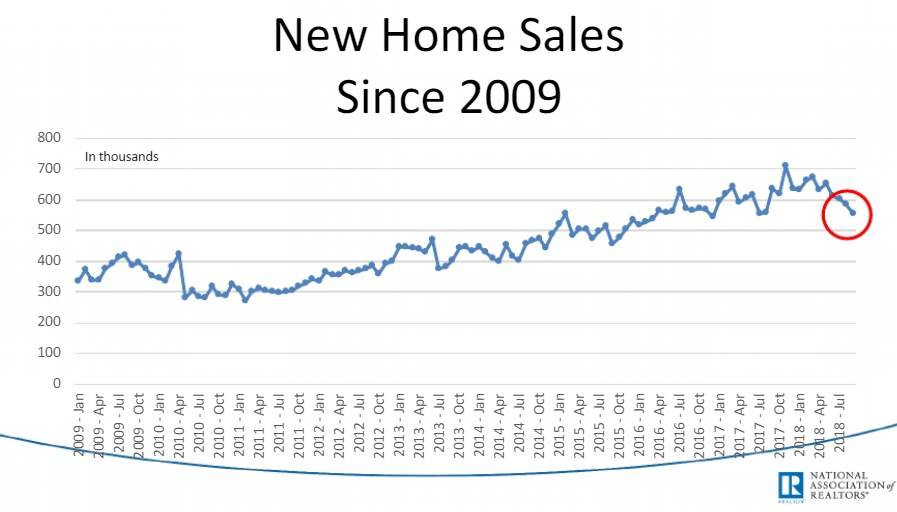 Unsold homes are now at their highest level since 2009. Builders are now sitting on top of more than seven months of inventory. There is an oversupply at the current prices, with not enough people able or willing to fill the demand.

So what could happen in 2019 if the current new home sales situation continues? The obvious answer is that builders will accept a lower price to shift their stock and try and make good on their costs.

But 2019 could also see a shift into real estate if investors perceive regular financial instruments as too risky. 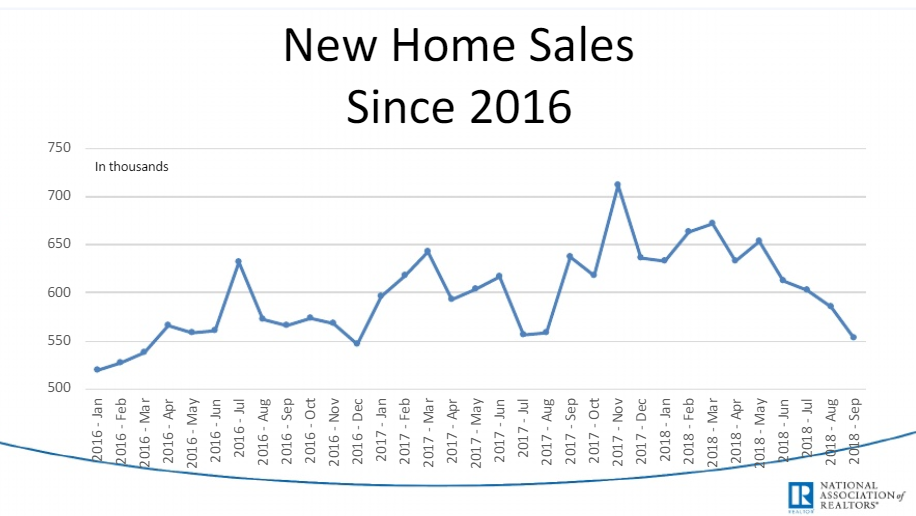 Higher interest rates could also add to the problems of falling home sales as people start to avoid buying altogether, preferring to rent instead.

A and N Mortgage Chicago recommends that people move sooner rather than later and take out a mortgage now before rates rise further.

Zillow forecasts that house prices in US cities will continue to rise in 2019. No, we’re not going to see double-digit gains, but if you own a home in one of these select towns, it’s more likely than not that you’ll see an improvement in your equity situation.

A Chicago housing market report suggests that America’s third largest metropolitan area will see a price of 5.2 percent in house prices this year, taking the average value of a dwelling from $225,000 to more than $237,000. Some of the best mortgage lenders in Chicago are looking for ways to open up the housing market and make it more accessible to those on lower incomes to support the continued rise.

Other cities are expected to benefit from rising prices too, particularly Los Angeles, where the average home price is expected to grow from $674,000 in 2018 to more than $726,000 by the end of next year. Despite already eye-watering prices, the value of the average home in San Francisco will go from $1.33 million to $1.42 million, a 6.2 percent increase.

The vast majority of America’s wealth is in the hands of a small percentage of people. Because of this, their actions can have an outsized effect on the housing market, especially the top-tier.

Although the wealthy are benefiting from the current policy environment of the Trump administration, they appear to have, as a group, become more interested in putting their wealth into stocks over the last couple of years.

Company profitability is high and with tax changes kicking in, it is expected to remain so. The demand for luxury real estate is not what it could be if all that wealth were sloshing about seeking alpha, but right now it’s tied up.

The low end of the market, however, is a different story, thanks to the buoying effect of wages. So long as the Federal Reserve doesn’t announce any more large increases in the funds rate in 2019, there’s a chance that gains in 2019 could offset some of the sluggishness in the overall market.

According to Robert Shiller, a famed macroeconomist, “…house price growth cannot outpace the growth of wages over the long term. Since 2000, the rise in house prices has outstripped both inflation and wage growth significantly, meaning… a risk that housing could eventually become just as unaffordable as it was in 2005-7.

House price growth is above the rate of increase in rent for many of the quarters since 2010, which could mean that we will either see a jump in rents in 2019 or a pullback in house prices. 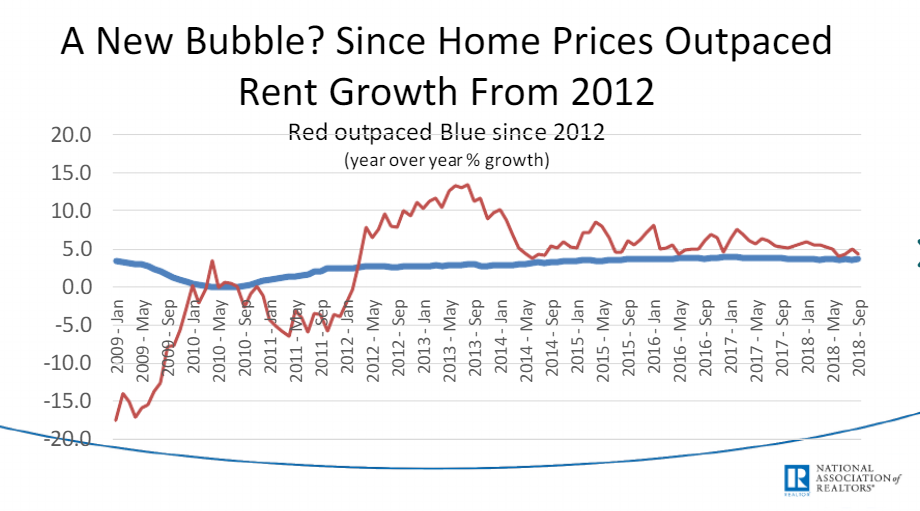 Although inflation-adjusted home prices are not showing any visible signs of peaking in 2019, there is an ever-present risk that “things will change.”

According to a recent NAR study of consumers, sellers are more willing to sell and buyers less ready to buy, for fear of what 2019 may do to prices.

The central issue is interest rates. Should interest rates rise to their historical norm for a roaring economy in 2019 – between 3 and 5 percent -we’re likely to see the bottom fall out of the housing market and a round of foreclosures. If rates stay below 3 percent, then homeowners are likely safe – at least for now.

2019 is shaping up to be an exciting year. On the one hand, the economy is continuing along, creating new wealth, and putting more money into regular people’s pockets to spend on housing.

But on the other, the Federal Reserve has raised interest rates several times so far this year and is likely to continue to do so throughout 2019. Although rate rises are not forecast to lead to the financial Armageddon we saw in 2007-9, the relationship between the money supply and the housing price index is robust – when rates rise, house prices fall.

So far innovative mortgage products and affordability have conspired to keep prices high, but how much longer will it last? Will you buy property next year?

A and N Mortgage Services Inc, a mortgage banker in Chicago, IL provides you with high-quality home loan programs, including FHA home loans, tailored to fit your unique situation with some of the most competitive rates in the nation. Whether you are a first-time homebuyer, relocating to a new job, or buying an investment property, our expert team will help you use your new mortgage as a smart financial tool.

This entry was posted in FAQs, Tips and Tricks. Bookmark the permalink.